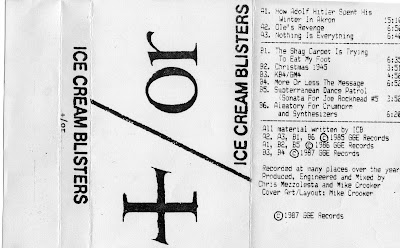 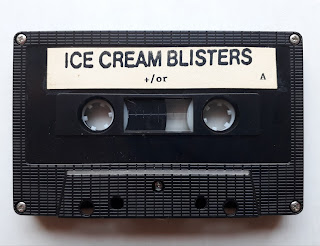 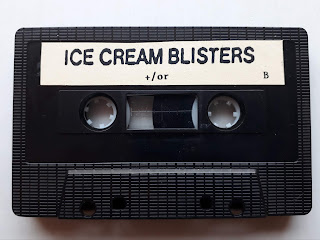 Here's another cassette by Ice Cream Blisters, a band from Kent, Ohio that was formed by Mike Crooker and Chris Mezzolesta with the involvement of friends. These same people also created their cassette label GGE Records that played an important role in the American home-taping circuit, releasing own and other US home-taping acts as well as collaborations with foreign home-tapers. As far as I know Ice Cream Blisters released about five tapes. I posted their When Nature Fails, Art Steps In cassette from 1986 last year on the blog.

+ / Or is a much more experimental release by the group containing lengthy synthesizer adventures, guitar manipulation, wind and brass instrument improvisation and fine field recordings. Along the way topics like Second World War and Christmas are touched on with a genuine love for absurdism. It's another great example of the free spirited American home-taping scene that had an uncompromising drive to create music. It also represents the distinct American music tradition based on the expression of the weird and the wacky. The approach and sound of Ice Cream Blisters keeps reminding me of Blacklight Braille, but ofcourse there are plenty of other strange American bands from that like-minded realm that existed during the 80's (and actually well before that), specially in the deeper abyss of the home-taping universe.

Maybe more Ice Cream Blisters will surface in the future. At least here's another one!