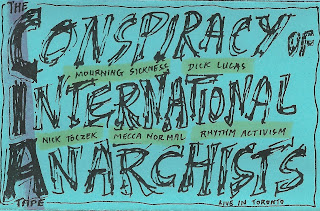 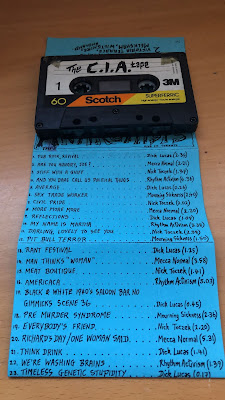 The following information has been extracted from the Alternative Toronto website and the BlackDotMuseum blog and partially recombined:

The C.I.A. Tape was recorded live at the Fallout Shelter and Ildiko's, and features poetry and musical performances by Dick Lucas (of Subhumans), Mecca Normal, Nick Toczek, Rhythm Activism and Mourning Sickness.

The Fallout Shelter recordings are the Toronto postscript to the Black Wedge tour on September 5, 1987.

The Fallout Shelter was a "nuclear free" performance space and coffee house run by the peace organization A.C.T. for Disarmament on Harbord Street.

The Black Wedge was a tour of activist resistance culture organized by Jean Smith of the band Mecca Normal, which set out to "spread the word of how to combine poetry, music and politics and have a fun time doing it.” As Smith comments about the Black Wedge tour in his essay "Take Something You Care About and Make It Your Life":

“One step easier than punk! The Black Wedge is out to spread the word of how to combine poetry, music and politics and have a fun time doing it. Hardcore poems and shredding guitars, radical voices crushing sexism, militarism, poverty and conformity. The Black Wedge wants to set wild hearts and imaginations free, to release a riot of emotion–opening up a new arena for activist resistance culture.”

At the beginning of 1986, Mecca Normal released their first LP on their own label, Smarten Up! Records. Soon thereafter, they flew to Montreal and hooked up with Rhythm Activism; another music duo dealing with social issues with a strong anti-authoritarian perspective. While the four stood around in the basement of the Canadian Broadcasting Corporation building waiting to go live on air from coast to coast, they listened in on the segment prior to their timeslot–England’s Red Wedge was being featured. The Red Wedge was formed in the late 80's to support the Labour Party, they presented political ideas within a musical context and showcased musicians that encouraged people to vote Labour. The Black Wedge however, that came into existence that same night, would encourage people to reclaim their voices, to speak out against oppression rather than rely on electoral politics as a means to solve social problems. Answers were looked for elsewhere than existing politics and against the establishment.

During the Black Wedge tour, through their lyrics or in between songs, the bands covered topics like sexism, disenfranchised citizens, poverty as well as other social issues which can be heard throughout the various songs of The C.I.A. Tape. A song like “Are you hungry Joe?” for example, includes a dialogue between Joe and someone that stands between him and the bag of groceries at a food bank, forcing Joe to argue why he needs food...

All tracks on The C.I.A. Tape were recorded live in Toronto. The tape was eventually published by Bluurg Tapes with the editing done in June '88 at T.A.S.C. Master Studios, Trinity & All Saint's College, in Leeds England.

"This tape is dedicated to all exceptionally oppressed people, but particularly to those whose entire lifestyle is being destroyed... Romany, Amerindian, Aborigine, and all other proud tribal people whose culture won't readily bow down before the all-consuming gods of western 'civilization,' social 'progress' and cash-culture.”

The original information for both Jean Smith’s essay and The C.I.A. Tape information can be retrieved from: https://www.alternativetoronto.ca/archive/items/show/500
https://blackdotmuseum.wordpress.com/the-black-wedge-1986/

This blogpost is a collaborative effort. Many thanks to: Juan Vacas (curation and assembling of text), Jon "Dietsociety" Kruithof and acab_in_1985 (SLSK) (providing rips and doing archival work). Editor: Bence. 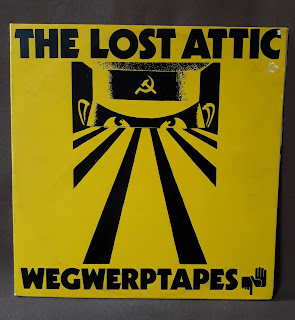 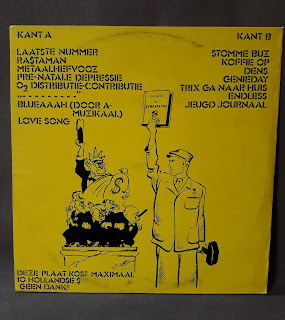 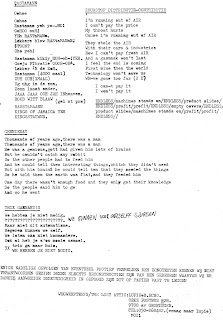