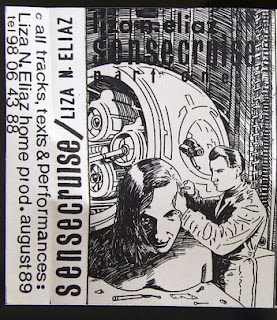 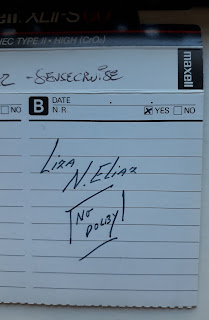 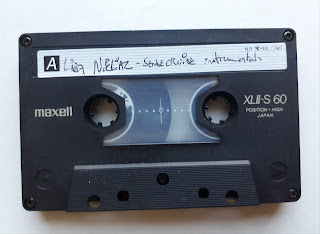 Since this is the third time that I write about Liza N. Eliaz on this blog I will re-use some of the older texts:

Liza Néliaz (1958 - 2001) was an electronic dance music producer and hardcore techno (terror) DJ originally from Oostende, Belgium. During the late 70's Néliaz started out as musician part of different Belgian avant-garde and new-wave bands. In the 80's Neliaz become more involved with the international home-taping network and contributed her tracks to cornerstone compilations on pivotal cassette labels like Insane Music (Belgium) and Exart (Netherlands).

By the late 80's, Neliaz started to play a self-invented style of proto-dance music that somehow connected the DIY spirit of 80's home-taping with new beat and the upcoming rave culture that would later evolve into established genres like techno, hardcore and acid house. She was a pioneer (one out of many ofcourse) in exploring these new musical styles in which perhaps the most important element was musical continuity. From the 90's onward Liza 'N' Eliaz established herself as an important hardcore techno DJ in the free party spheres which granted her the underground title of Queen of Terror. The name Liza was adopted because in those days it used to be a nickname given to Trans people in Flanders. She used her abilities as a musician for her DJ-sets that were uncompromising, lethal and full of energy. Neliaz lived a nomadic lifestyle dedicated to music until the end of her life. She sadly passed away in 2001.

The cassette that has surfaced here is an odd one. It was dubbed on a blank tape and specially given to Hessel Veldman and his family by Liza during the late 80's when she resided in Holland. First of all it contains the instrumental versions of the first Sensecruise release (not sure if there are any non-instrumental versions since I don't own the "official" Sensecruise part 1 cassette, so can't verify - let me know!). The interesting part is that the cassette continues with some loose tracks that I can partially recognize by checking out other releases, but there are also some tracks that are unknown to me.

Still the fact remains that this is a remarkable set of songs from that late 80's Neliaz sound palette. Quite a treasure, because we repeatedly have no idea whether more music by Liza might be out there. You never know what survived on cassettes of her friends or whether some music was given to befriended DJ's from the time. Her later DJ mixes are still alive on many platforms on the web and seem to inspire many people today and beyond.